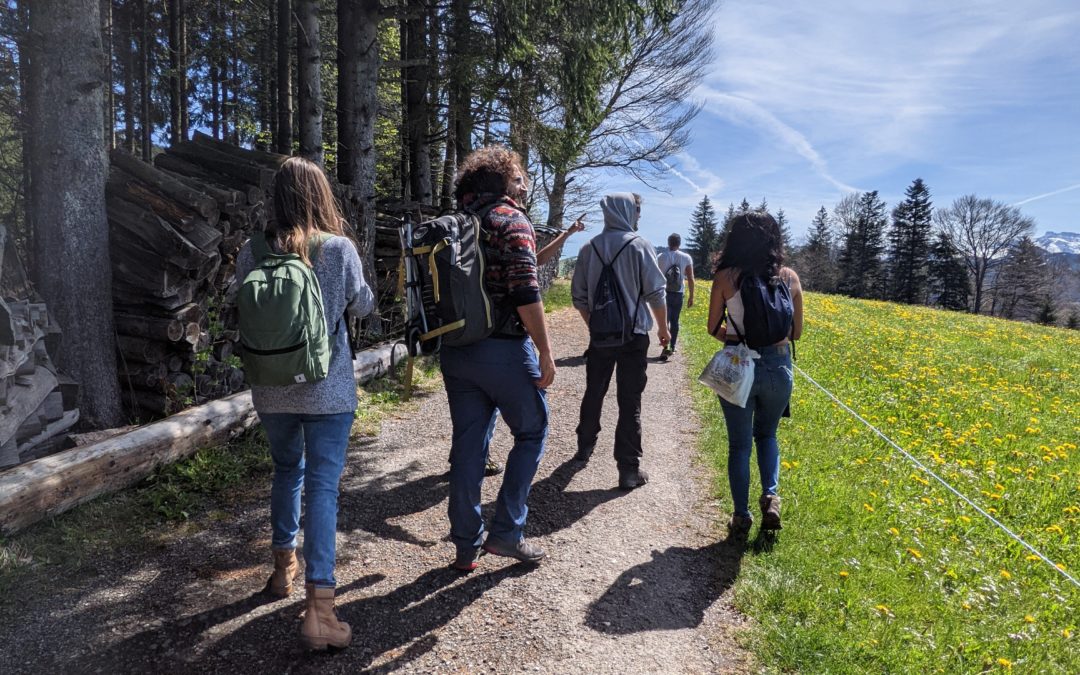 This first inofficial trip led the first fellowship of a diverse group of people to Etzel. Half of the group was made up of my roommates, and the other half were expats from different countries of South America where I knew only “the Bridge” Caua, who, with a bit of help from his friend Ana, helped gather this group.

After having a little chat at the train station in Oerlikon, where we had the meeting point, the group hopped into the bus, and we took off to Etzel in a very spacious rental van that I rented the same morning. My worries that the group would not know what to talk about on the minibus were eliminated quickly. Paco (one of the expats currently doing a Ph.D. in Evolutionary Biology at ETH) made the bold statement that “Life is more important than Physics” during his introduction. After that point, the group discussed the whole hour it took to reach Etzel about god and the world.

After reaching Schindelegi and a short pipi break at the nearby restaurant, we were ready to take on the ascent to Etzel Kulm. Very quickly, the landscape changed to a very picturesque landscape with great views over fields, forests, and mountains that were only slightly tilted by the fact that the first stretch of the hike was insanely steep. Halfway through, we reached the fireplace I intended to keep as a base for the group during the “Surprise Spooky Tour” that I announced beforehand. The fireplace was already occupied by a lovely elderly couple. However, after talking about how beautiful the view of the alps from that spot was, they eagerly invited us to join them. Due to Covid Restrictions, only 5 people at a time could enter the Festungsbunker that we would visit with the new owner and his wife. So I proposed that the other group would, in the meantime, make a traditional swiss outdoor lunch on the fire. I brought the first group to the Bunker located near the fireplace and went back to the group waiting at the fireplace. We gathered wood and restarted the fire of the elderly couple. After thanking the tree that contributed the stick we carved to impale our Cervelats (traditional swiss sausages usually put on a stick and cut with funny patterns), we sat around the fire. Holding our sticks loaded with Cervelat and snake bread over the fire, we talked about life in different parts of the world. At some point, the other group came back with the tip to take some warm clothes. We also ventured off to see what the Surprise was all about, leaving the other group with the nice fire we kept. 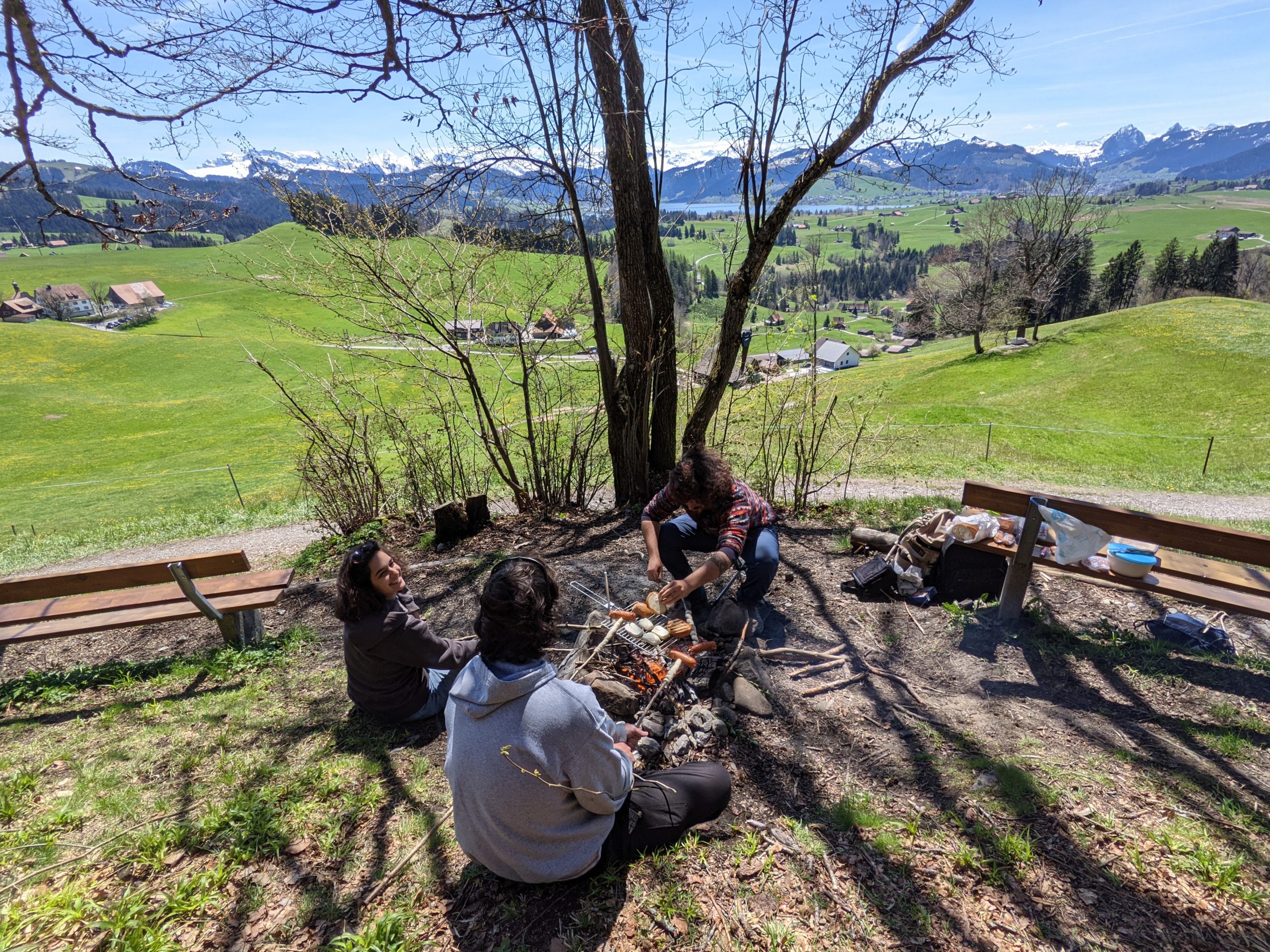 After a short hike, we met with the owners in front of the very innocent-looking entrance of the building we visited. The owner, a very passionate collector and restaurateur of the site, and his wife, who translated for him, gave us a warm welcome. The entrance looked like a small concrete building on the side of the mountain. Shortly after entering the building, it became apparent what this thing was. Looking at a picture of the layout of the complex, it revealed itself as an amazingly hidden fortress of the “Reduit Strategy” of the second world war. It was part of the defense line around the alps, should the surrounding forces ever decide to attack Switzerland. After the cold war, many bunkers went out of service and were sold to the public. Like the one we were standing in, a couple of them were turned into fascinating museums by private collectors and enthusiasts.

In hindsight, the tour was an absolute hidden gem. The Bunker was very well kept, and the owner tried to restore every little detail. From the Machine guns to the bedsheets, everything looked 100% authentic and seemed like the soldiers just left. Also, the fact that he lives there part-time and sleeps in the bed where the commander of the base once slept left the feeling that it’s still alive. 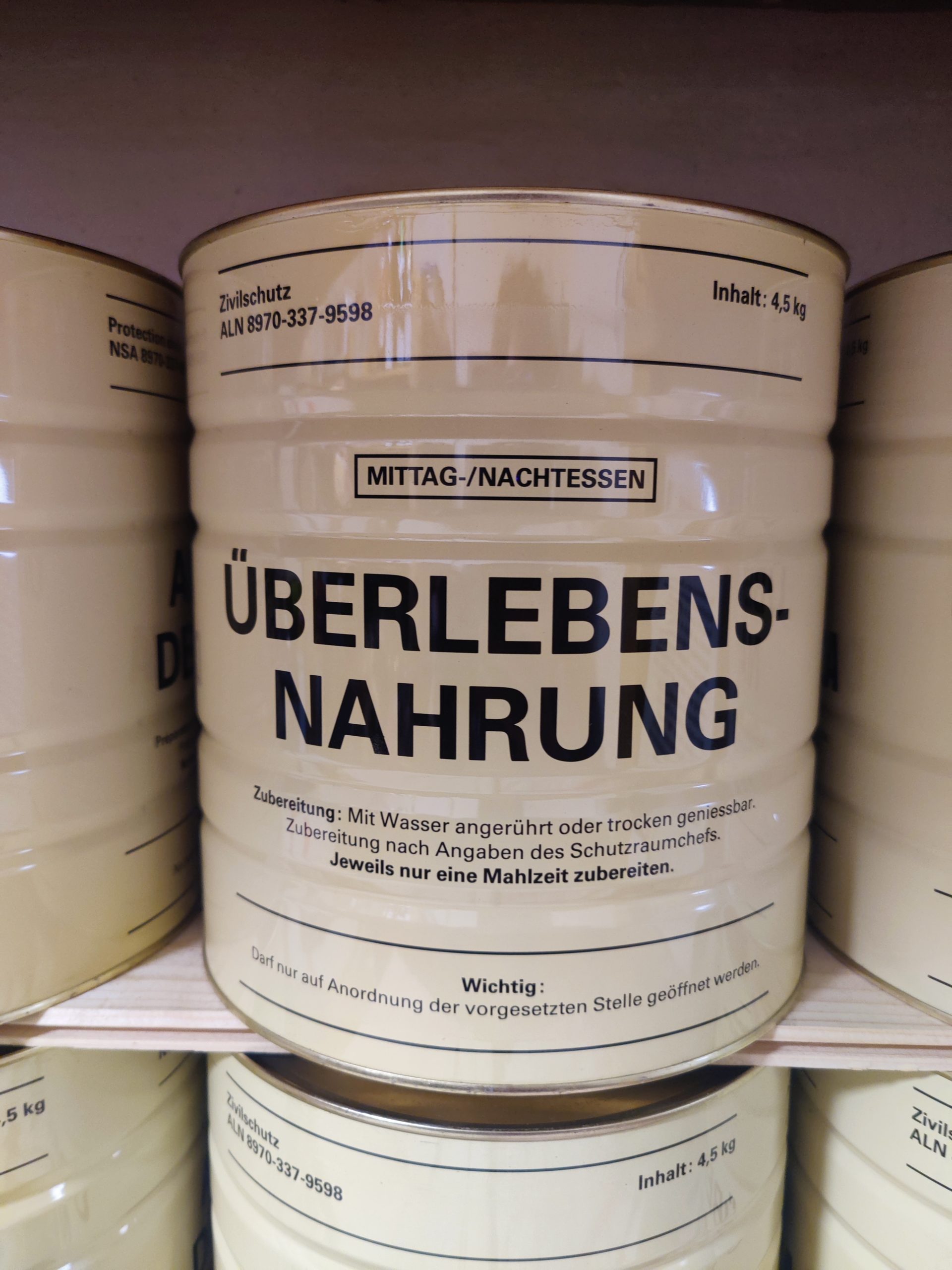 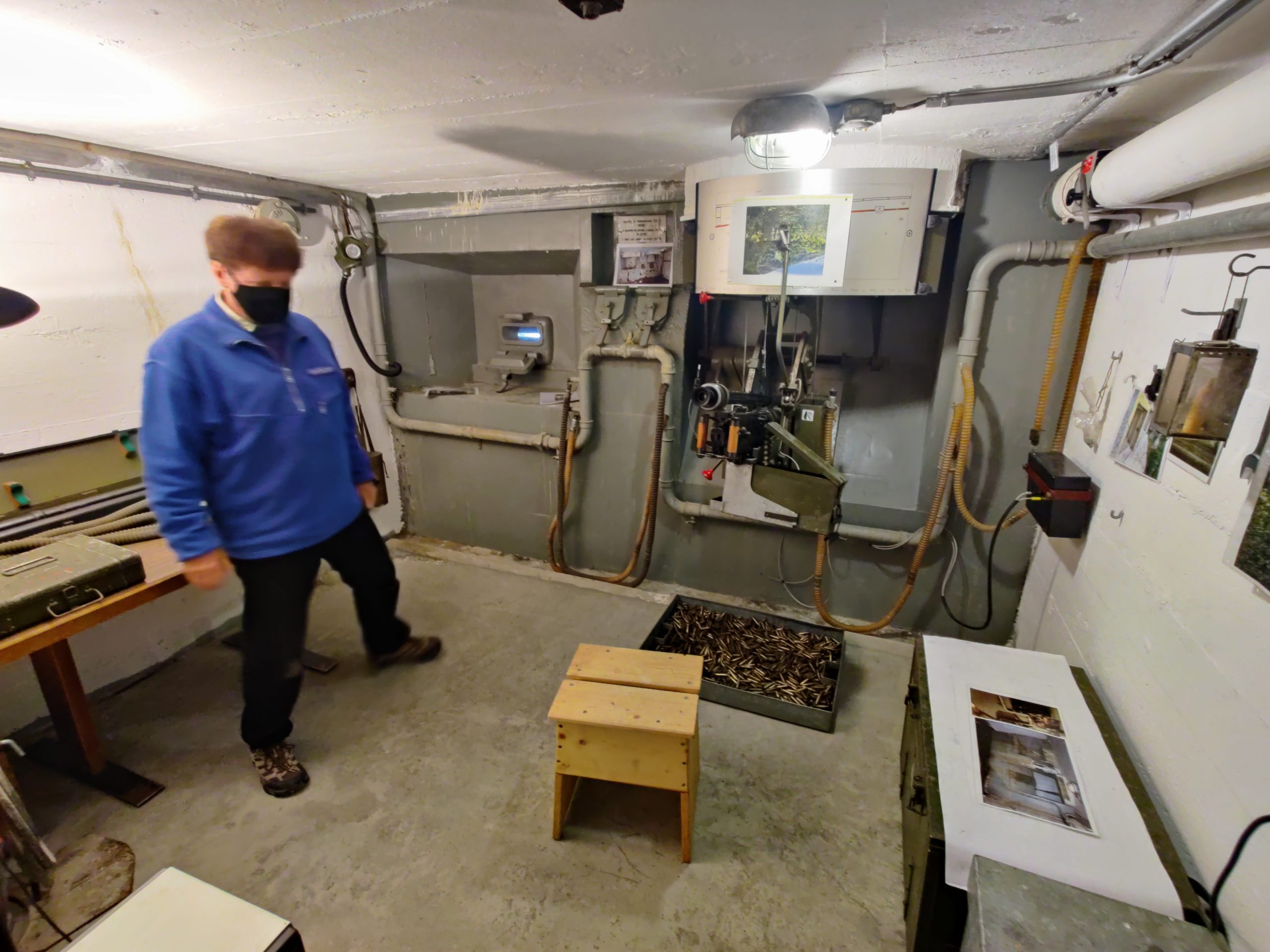 As the last section of the tour, we hiked up the steep stairs up Etzel Kulm. The views from the top of Etzel were genuinely breathtaking. On one side, the flatlands with the three lakes of Zurich lay beneath our feet. On the other side, we saw the Sihlsee, Einsiedeln, and the wall of mountains that make up the beginning of the alps.

On the way back to the minibus, we crossed some of the defense lines that the guide told us about. As a glorious end of the trip, we stopped at a Farm that sold handmade Ice-Cream shortly before we reached the car. Well-fed and tired, we drove back home, knowing this would have been only the start of something great! 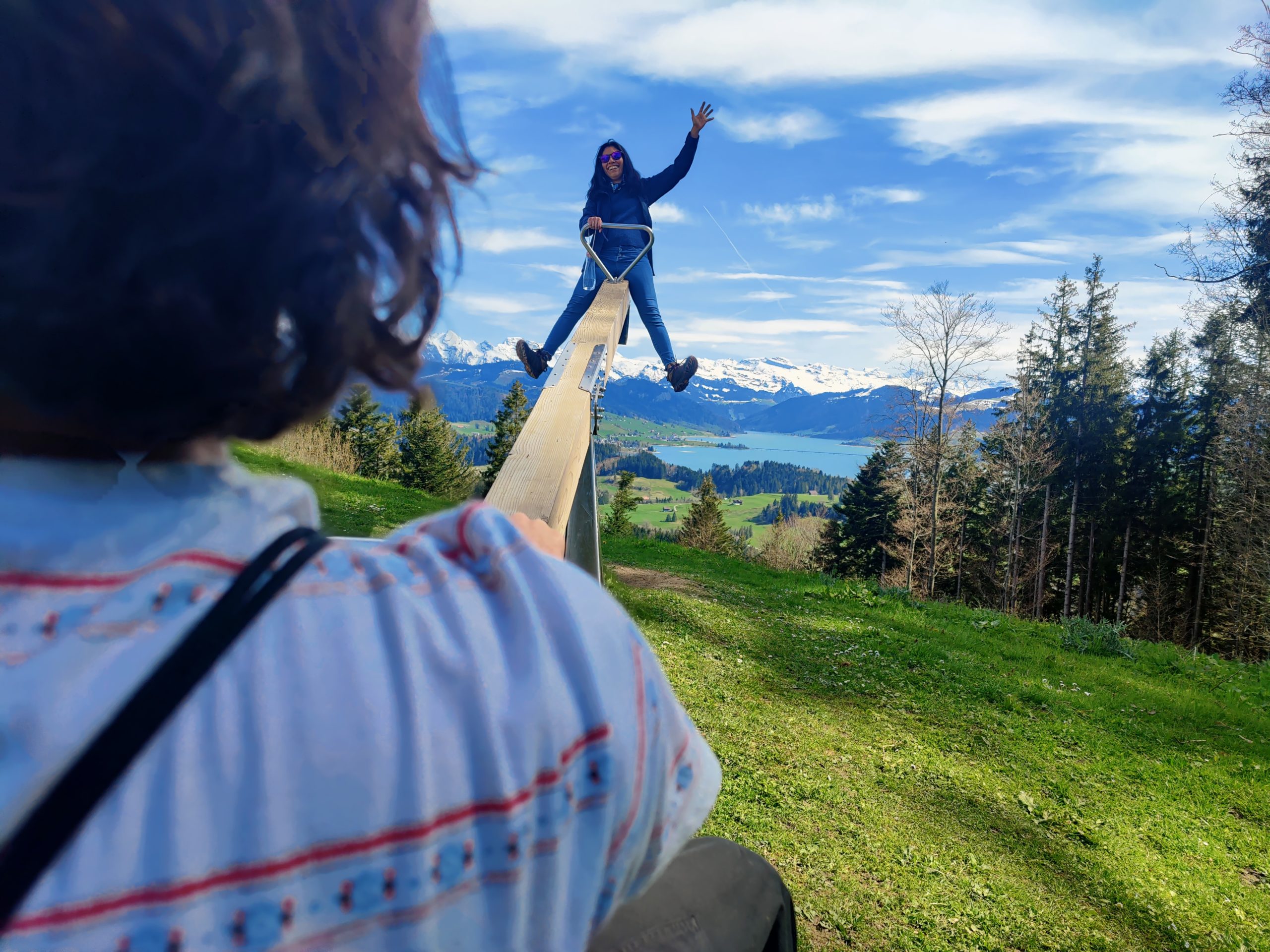